Talent & Trust = The Building Blocks of a High Performing Team 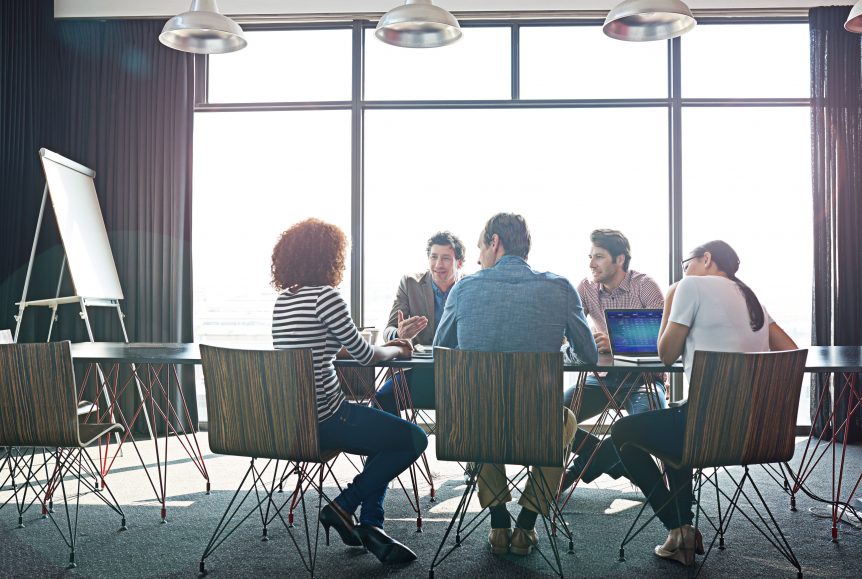 What do you see in the photo above? A team that appears to be interested and engaged in what is being discussed.

What if the leader is simply telling the other members of the team what will occur? That changes the entire dynamic of what we think we see.

And that is just what many have experienced when working as part of a team. Perhaps you can relate.

The starting point to build a high-performing team

Developing a knowledge and understanding of the talent at the table is the first step in building a high-performing team. Yet, those at the table are often there because of their role or title – not for their talent or what they can contribute. What follows is a story that makes this point real.

After team-building work at the executive level of an organization, the decision was made to roll the process out to all employees and teams. The first step would be to know and understand the talent at the table.

As the rollout rippled through the organization, the President attended every team session as witness to the impact and as supporter of the effort. Seeing the President in your team meetings tends to emphasize the importance of the process…

The outcomes amazed the President…and the participants

There were individuals who claimed their unique talents for the first time. There were accolades and encouragement and collaborative partnerships born from an understanding of each other. There were ah-ha’s and appreciation for different work styles.

For this family business, an incredible sense of worth, value and trust was cultivated throughout the entire organization. When a big contract was won with a new client, the President put her deeper level of knowledge of the team members to use.

Instead of considering the incumbent, the “by title” person that would ordinarily lead an engagement such as this, she was considering the direct report to that person. In that case, the person best suited to deliver was not the incumbent. But how on earth could that even be a possibility?

Trust = the key building block of a high performing team

The incumbent would surely resist, even if she appeared to agree. Knowing what she knew about the formation of high-performing teams and the individuals that make them up, she could not ignore the obvious choice. This would be a test of trust.

The President took a risk and had a conversation with the incumbent, sharing what she saw and why she thought it would be a good fit. And then she asked the million dollar question: “What do you think?”

The incumbent not only agreed, but supported the idea wholeheartedly – even offering additional insight that the President had not previously seen. Relieved and empowered by the trust, the President then approached the direct report.

She was honored by the recognition of her talents and happy to be engaged in the new and challenging assignment. The direct report, incumbent and President all worked together to formulate the rest of the team that would serve this new and important client.

The engagement was a huge success. It established the direct report as a leader for these types of engagements and gave the firm a new service offering. The lines of reporting did not change.

The knowledge the entire organization had of the talent and work styles of team members was enough to allow for the embrace of a new and exciting way to build high performing teams – not by hierarchy or tenure, but by talent.

With the extensive use of matrix teams in organizations, this type of talent identification and work style appreciation is the starting point to building high-performing teams. So, just how do you get to know the talent at the table?

Start with an assessment that measures individual work styles and utilizes team workshops designed to create an understanding of differing styles, motivations and talents. This understanding builds trust, which is the crucial foundation of any high-performing team.